To watch the film and find more information, click on the menu.

I think that I ended up concentrating on what the people who worked at the stalls had to say. I think that they seem to have a particular insight into Leicester market because of their role in serving so many different types of people over the years. This is not to say that the customers didn’t have anything interesting to say!

This man happened to stand in front of my camera and so I recorded his transaction with the fish merchant. However, while he was waiting for his fish I asked him if he wanted to be interviewed and he didn’t want to.

I was disappointed with this because I really liked his makeup and thought that he must be quite an interesting person to be wearing such wonderful makeup in the daytime. Was he an actor from the local theatre? Did he simply just enjoy wearing makeup? 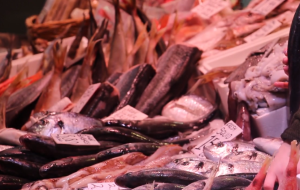 Someone in class suggested this and said that perhaps people wanted to have a part in representing Leicester to me, because I don’t seem like I am from there. However, I was born in Leicester and have spent most of my life there.

I am still not sure what being ‘from Leicester’ means exactly. A man I spoke to who was originally from Poland and had lived in Leicester for 8 years introduced himself as being “from Leicester”.

I found it interesting that so many people were so willing to be filmed (almost everyone I had asked said yes!). This is mainly because I know that if I were in the same position I would not want to be filmed. This could perhaps be because I am an anthropology student and so I would expect everything I said to be analysed and looked at in detail, whereas non-anthropology students might not think about this aspect of the filming process?

However, whenever I spoke to the people at the market about what I was filming and why I was filming, I explained the concept of anthropology to them so they would know what the film would be for. Perhaps they would have felt guilty for saying yes to being filmed and then deciding they didn’t want to. Perhaps they also didn’t mind being filmed because they knew it wasn’t for something ‘big’ like a television series?

I thought that I would find people acting ‘differently’ in front of the camera. However, a lot of people didn’t really seem to notice the camera. Or, if they did, they didn’t seem to mind and just carried on with their shopping.

Perhaps people wanted to be filmed / were more willing to be filmed because I seemed more ‘professional’ with the camera on a tripod?

One thing that I have noticed watching my videos is that, when interviewing someone, I have a tendency to say things like “yeah” and “oh okay” to encourage them to speak more.

I found this very frustrating because I didn’t really want to be present in the video at all, and sometimes it has been difficult to edit out my words because the interviewee and I are sometimes talking over each other.

I am now at the point where I need to re-watch my footage and decide on a kind of ‘narrative’ (or perhaps it won’t have a narrative?). I think that the multicultural perception of Leicester is something that a lot of people spoke about and so I will probably include something about this.

I am currently waiting for my laptop to be fixed so I can begin to edit. Therefore, for now I can just concentrate on what I think the narrative could be, but since I am unable to edit, it is quite frustrating.

I would also like to find some kind of music to possibly use in the background. This is just a possibility though – perhaps the use of background music would take away from the organic feel to the film?

I feel as though I have a lot of footage and it is a case of editing out some of the interviews – this may be a difficult process but it will be an interesting one.

Deciding on a Narrative 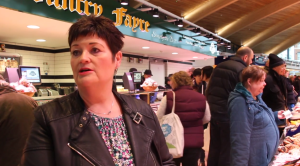 I feel as though some of the interviews I did with people at the market could have been filmed in a better way. When I was filming without a tripod I was holding the camera and some of the footage ended up being slightly shaky. However, when filming with the tripod, sometimes it was difficult to position the tripod. I didn’t want to get in people’s way at the market place so I set up the tripod fairly close to the fish stall’s counter, but this meant it was difficult to find a place to stand in when interviewing people. As a result of this, some of my interviews with customers seem to be too close up. Since everyone seemed to be busy and were already taking time out of their day to talk to me, I felt as though I didn’t have time to properly set up my shots sometimes. There were also some instances when the top of the tripod kept moving forward and therefore spoiling the shot. However, overall I am mostly happy with the framing of my interview shots, as they show the busy market in the background. I also feel that what the people had to say was more important than what the shots ended up looking like.

I feel that the interviews would have looked a little strange if people looked at the camera, so I tried to prevent this by standing slightly to the side and getting people to talk to me, the interviewer, instead of the camera.

I made the mistake of often responding verbally when people spoke, as I didn’t want my voice to be in the film. This made the editing process more time consuming and stressful.

As well as filming interviews, I also shot a lot of other scenes around the interview so I could build on other narratives if I needed to. I got some shots of the people I interviewed buying fish and interacting with the fish merchants. This was useful to edit in alongside the interviews.

I rehearsed some interview questions in my head before filming, but I also treated the interviews more like conversations in order to put people at ease. I think this worked out well because everyone seemed happy with answering the questions I put to them. 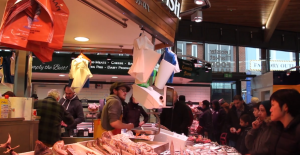 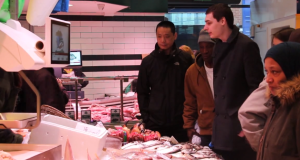 I went home to film for a second time and this time I brought a tripod with me. I felt a little more ‘professional’ (if you can say that) and had a lot more people coming over to me to ask what I was filming for. It was a lot harder to film inconspicuously than it was without the tripod. In a way this was better, as I had a few people inquiring about the camera which helped me to be able to find people to interview. However, sometimes I felt like I was an obstruction in the busy indoor market.

After the last time filming I realised that I hadn’t asked many customers questions – I had concentrated mainly on the people selling the fish. Therefore, this time I made it a priority to talk to customers. I asked them why they chose to buy fish from this particular stall, asked them how they intended to cook the fish, and asked them about their thoughts and feelings about Leicester in general.

A lot more people were willing to be interviewed than I expected, so this was a good unexpected surprise, especially since I know that I probably wouldn’t agree to be interviewed if someone had asked me! Some people seemed very interesting but didn’t want to be interviewed – this was a little disappointing but perfectly acceptable and expected. A lot of different people from all different countries and cultures agreed to be filmed and had a lot to say about the multiculturalism of Leicester. I also got some more steady shots of the marketplace and the array of fish on display.

Another day of filming

The information we were given in lectures on audio was useful. For example, one week we looked specifically at audio. We practised using the microphone on the camera in class and it seemed fairly straightforward. In class we also used another type of microphone which could be used separately from the camera – it picked up sound really well and was very clear, even outside. However, I decided against using this for my filming because I thought that holding the camera and the microphone would be too much to handle for one person. Thankfully most of my filming took place inside an indoor market and so things like the wind didn’t affect the filming.